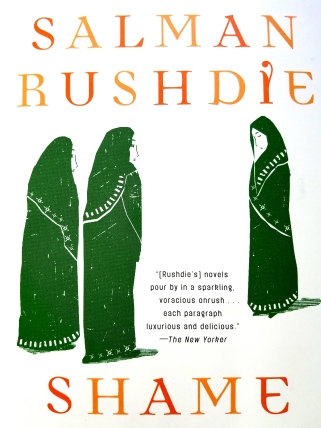 Dizzy, peripheral, inverted, infatuated, insomniac, stargazing, fat: what manner of hero is this?

But what of that “wrong miracle,” that strange, pitiful girl, Sufiya Zinobia? Opposites attract, a marriage is made: Sufiya Zinobia and Omar Shakil. Shame and Shamelessness.

Shame was published between the better-known Midnight’s Children and The Satanic Verses. Like Rushdie’s other novels of “not quite Pakistan,” Shame is also a critique of that country’s fugitive democracy. Rushdie’s Iskander Harappa and Raza Hyder are, respectively, Zulfikar Bhutto and General Zia.

All this isn’t to say that Rushdie’s novel can’t be appreciated outside of Pakistani politics. Shame is old as man.

In Rushdie’s novel, the private becomes public: an inversion mirroring Omar Khayyam’s own upside-down beginnings. Voyeurism is a pastime of  the young hero, as it will be for his future brother.

Voyeur or no voyeur, Rushdie’s characters do their best to conceal the evidence of their failings. Pregnant ayahs leave in self-imposed exile. Dead men are hanged a second time. Political and romantic rivals avenge themselves with humiliation and brutality. There are fig leaves and dupattas and shawls and burqas. There are lies. Always there are the lies.

Hush hush. Burn the sheets, clean off the blood.

And what is the result of this covering up? The flames burn hotter and leap higher and reach farther and dance more viciously. Shame is constant. Shame fights back.

“Shamelessness, shame: the roots of violence.” Rushdie shows us the results of mutual offense. Pride may be one of the mortal sins but shamelessness is equally damning.

Its effects are far-reaching but shame is kindled right at home, inside of us, slowly at first, fermenting, but obstinate in the last degree. It’s pathological in its destruction of the self (Rushdie makes Omar Khayyam an immunologist who can do little more than lance the buboes after Sufiya’s first beastly tantrum gives way to a somatic response). We cannot hide from it, we cannot cure ourselves of it and we certainly cannot control it.

And so we blush.

Rushdie gives a trenchant account of both individual and collective shame. He scrutinizes it on every level, traversing the highest planes of morality as easily as he wallows in the scatological.

But he also gives us optimism.  His novel reminds us that, for all its beastliness, in feeling shame we humans haven’t yet lost our conscience.