“We don’t owe him a thing. He got a fair trial, didn’t he? What d’you think the trial cost? He’s lucky he got it. Know what I mean?” 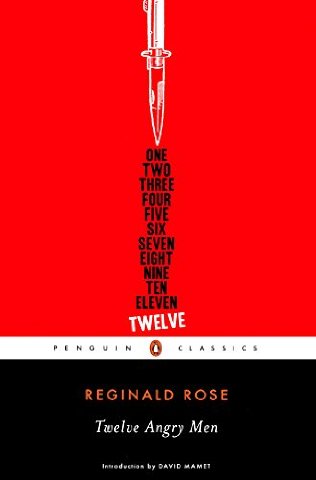 Reginald Rose’s teleplay Twelve Angry Men opens onto an empty jury room, drab and bare of what isn’t necessary. “One man is dead. The life of another is at stake. I urge you to deliberate honestly and thoughtfully” – the judge, reminding the jury (and the audience) that New York required the death penalty for any convicted murderer.

Which is why the behavior of the men who then file into the jury room is so revolting.

Impatient and bored, their light-hearted chatter about the weather, confessions of nearly falling asleep and “I mean, did you ever hear so much talk about nothing?” They make jokes about naked women, doodle out an advertisement for work and comment that “This better be fast. I got tickets to a ball game tonight.”

These are the men who must decide the fate of the 16-year-old defendant who is charged with murdering his father.

Rose never mentions race specifically, but we know the defendant is black, and we know the jurymen are white. The defendant is from Harlem, next to the el tracks, and has had many run-ins with the law before. He’s well-acquainted with switch knives and knows how to give and take a beating.

Rose begins to break the men down with allusions to New York’s slums and derision for the people living in them. It’s with these snide remarks that Twelve Angry Men turns so thunderous.

The kids who grew outa those places are real trash (words of the tenth juror). But the fifth  juror, he grew up in a slum, too, just like the kid on trial. Would the tenth juror approach his trial, if ever there were one, with this same attitude? How many people are there like the tenth juror? They all know this answer because they all agree that a hung jury would be the same as a guilty verdict.

Personal feelings aside, it’s the evidence and the facts of a case that ought to guide a jury. But in Rose’s play it’s personal feelings – of  an altered, introspective (and so less impulsive) tendency – that allow the jurors, one by one, to see, if not the truth of the case, then the holes in the evidence. Rose uses his jurors’ spoken prejudices to skin them raw and reveal their fears and thoughts such that everything is laid out openly. The evidence doesn’t seem so conclusive anymore.

The eighth juror, the one hold-out from the initial 11-1 guilty vote, has a steep task ahead of him: to turn “guilty until proven innocent” on its head and remind the other men of their purpose as a jury and of every man’s right to a fair trial.

The eighth juror is a moralist. He makes it clear throughout the play that he doesn’t care whether a juror votes guilty so long as that juror believes in good conscience that the defendant is guilty. He admits, too, that he doesn’t know the defendant is innocent either, that in fact he “probably is” guilty, but there’s enough doubt in him that he won’t vote to send him to the electric chair.

What the eighth juror cannot accept, and what he works toward having the other jurors also not accept, is a guilty vote made through prejudice, laziness, impatience, selfishness or any other feeling that is not full conviction in the kid’s guilt.

Rose’s play shows the psychology and argumentation of 12 men trying to work out a case with the most severe penalty attached to it.

But Twelve Angry Men avoids being a hopeful play. True, the 11-1 vote becomes a 0-12 vote in the end (this is no spoiler; the play isn’t about that final verdict but about how the jury came to that verdict), but the decisions of those last couple of jurors to switch their votes to ones of not guilty had less to do with sincerity of belief than it did the late hour of the day.  These men remained unchanged. How will they act if called again?