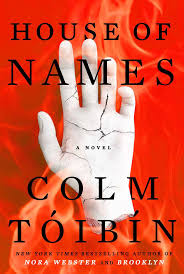 The curse placed upon the House of Atreus…Colm Tóibín’s most recent novel, House of Names, is a retelling of the ancient story of Clytemnestra. It tells of her husband’s, King Agamemnon’s, sacrifice of their daughter Iphigenia so that the winds of war may blow in his favor. It tells of their son Orestes’ escape and their daughter Electra’s imprisonment. It tells of Clytemnestra’s affair with the prisoner-come-king Aegisthus and the manipulation they played in the name of love and power.

Tóibín tells the story through the eyes of Clytemnestra, Electra and Orestes. His finesse lies in his control of language and perspective, which shift with each narrative. His words are of the simplest nature, but he pulls the strings of linguistics to make the words bleed from his pages.

Clytemnestra, as Tóibín wrote her, exudes power. There’s an intimacy, too, in the words she speaks as she forces empathy on the reader just as she’s driving the knife into her husband. Hers is a voice that permeates; it hangs in the air and touches on all persons. Tóibín writes her narrative in the first person and eliminates contractions, prompting an effect that favors Clytemnestra’s ascendant rule at the start of the novel. She has a hand in everything, and through Tóibín’s writing her presence lingers even after her own murder.

And with her murder Tóibín alters his prose almost imperceptibly. Clytemnestra speaks with the same voice he gave her at the beginning – permeating and knowing – but it no longer is given the same forcefulness, nor does it belie resentment anymore. It’s the voice of a soul in limbo, and it sees that very curse, handed down through generations, that brought so much ruin; it sees the future ill will fated for those still living, and it feels the despair these two visions engender.

Tóibín is less persuasive in his writing of Electra. He doesn’t give her any motivation for either her cruelty or her loyalty. She turns against her mother for the murder of her father, but she never questions her father’s sacrifice of Iphigenia and grieves both of their deaths in equal measure. Why is she loyal to the one and not to the other? Why does she demand of Orestes that he murder Clytemnestra? Why does she trust implicitly Leander when he comes to the palace in vengeance, shutting out Orestes, her own brother, as too weak (or too sentimental?) to do justice to all those whom his mother had wronged?

Tóibín shifts his narrative into the third person when he tells the story through Orestes, a technique that works well with Orestes’ lack of agency. Orestes is an outsider, always. Secrets waft through the palace corridors and footsteps tip-toe in the night. There are whisperings in the garden. There is always plotting and planning and scheming, and Orestes, son to King Agamemnon though he is (and so rightful heir to power), is never privy to it.

During his period of captivity (and subsequent self-imposed exile), Orestes is mere shadow to Leander, who urged Orestes to escape with the sick Mitros, all of them kidnapped as a precaution when Clytemnestra and Aegisthus took power after Agamemnon’s murder.

Tóibín had to construct the events that we read in Orestes’ narrative: there is no record accounting for his time away from the palace. Instead of doing away with this part of the story for want of sourcing in the original, Tóibín used this opportunity to show more plainly Orestes’ character so that we might understand him better.

Tóibín also used this opportunity to write details into Leander’s life, and he gives Leander an odd purpose in this retelling – the sometimes lover of Orestes but more often the parental figure Orestes needs. He’s also an outsider made insider to the damned House of Atreus. Can the gods’ curse end if power is given away?

Leander is a principled man, even as vengeance for his murdered family ferments inside of him year after year; a man biding his time, he yet has the patience to refrain from impulse. He’s courageous, decisive, smart, fair. He’s both heavy-handed and merciful in his governance when he puts Aegisthus in his place.

But it is Leander who prevents the murder of Aegisthus, no matter that man’s treacheries, no matter his massacring.

Clytemnestra’s story is an ancient one. House of Names brings this story, with all its attendant viciousness, into our popular fiction for the first time.