Riddle me this: how do you find a dozen eggs during a siege that has left people to shoot horses for their meat and boil the glue in book bindings for its protein? 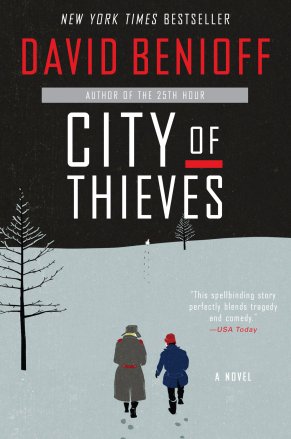 Lev the looter and Kolya the deserter who isn’t really a deserter (he left his unit because his “balls were ringing like a couple of church bells”) are two young men caught up in the summary justice of Leningrad under siege. Looting and desertion demand execution. But a powerful colonel has a daughter who’s to be married. The colonel’s decree? Let there be cake – and cake demands eggs.

In lieu of execution, Lev and Kolya are sent in search of a dozen eggs. If they find them, they get to live. David Benioff (yes, of Game of Thrones fame) wrote an engaging story in his novel City of Thieves. It’s rolicking in its adventure, grave and grisly in its imagery and affectionate in its characters. It’s not “just another war novel.”

But City of Thieves reads almost as if it were authored by two writers. One is an historian with a knack for writing scenes he fills up with the singular horrors of his setting, the proportion of outlandish reality (cannibalism was a fringe practice during the siege of Leningrad) and routine hardship carefully balanced to distill those 872 days into a single week. The other is a degenerate youth capable of writing such cozy phrases as “I must have sprayed a liter of come inside her, north and south” at the most inappropriate times.

Barracks banter, black humor and off-color jokes: a war novel needs these because the soldier needs these. But there’s a time and place for it that Benioff doesn’t seem to understand. Sometimes his writing is an obvious run-up to a penis joke or to Kolya jibing Lev for being a virgin.

We’ve gotten this soily, easy humor from so many authors: Guy Sajer shitting dysentery out the back of a convoy truck as it rolls back from the Eastern Front (Forgotten Soldier); Müller requisitioning the boots off his soon-to-be-dead comrade with a sour laugh, early in the novel but so late in the war that desperate coping has long replaced all sentiment (All Quiet on the Western Front).

These authors have given us insight into what the people in their stories may have felt and in ways we might understand. War doesn’t obliterate everything that is human in us, but please understand – it makes us curl up into our primal selves. You know about sex and shit, so here’s that but in wartime, starved and addled by gunfire that you can’t know.

Sex and shit can have class. Benioff misses the mark when he turns them into a middle schooler’s idea of stand-up comedy.

That’s not to say that Lev and Kolya aren’t still a loveable pair – they are, when we strip away their clunky dialogue. Benioff writes their friendship well and toward the end of his novel even saves his jaunty, too-confident Kolya from becoming a caricature. Not exactly a coming of age story, but one that has in it the ties of friendship and the gradual changes of years condensed into seven days. And it’s believable. That’s a mark of a very good writer so why did he make us wait until the final 50 pages to see it?

Because while Benioff did thorough research for the facts of his setting (his more mature scenes are inescapable in their imagery and summation of war), it may have behooved him to read more from fiction, too.

It isn’t only the juvenile grasp of characterization that dampens the first 80 percent of his novel. His word choice is jarring in a few parts, sometimes because it’s modern day slang, at other times because his similes are disjointed (one of his characters, a near-toothless Russian partisan, draws his pistol “with the speed of an American gunslinger.”) I don’t generally think of the Wild West when I think of Russian partisans, but okay.

City of Thieves is a good story, and Benioff’s writing is strong for much of it, his pacing balanced to move the story forward and to linger at the more fulfilling points that show the war – and the siege – so well.

His best scenes – the giant in the Haymarket; Lara’s story at the house the Einsatzgruppe occupies; that scene of the chess game with the Sturmbannführer, dry-throated and quivering in its tension – have a tinge of the evil unreal to them that makes them feel like the old Russian classics, even though Benioff is a NYC-born American now splitting his time between Manhattan and Beverly Hills.

Not just a good story, City of Thieves has some artistry to it. Kolya is a Red Army man, but he’s also a writer, as Lev’s father had been before the NKVD came for him. Kolya drops little pieces of his novel, The Courtyard Hound, written in his head if not on paper, while he and Lev trudge through the snow. It could be a near parable for Leningrad.

Benioff’s story for City of Thieves is his grandfather’s story. It’s a cute story, a little too neat to be completely accurate (though its conclusion of the wild hen chase for eggs is, thankfully, believable in its absurd cruelty).

Benioff confessed in his prologue to City of Thieves that where his grandfather’s memory failed, his grandfather had told him, “David, you’re a writer. Make it up.” So maybe we can forgive him: suspend your imagination and spare a pinch of your salt rations for this one.