I’ve had too many books that I adored while reading them which now carry with them nothing better than that awful, says-nothing, lazy accolade: I enjoyed these books, sure I did! They were good books.

I don’t doubt there were a great many good books. But why they were any good escapes me now. You’d think it would be easy to remember the good ones.

I read through a few of my older reviews on here last week and everything about these books I reviewed came rushing back. The things I thought I’d forgotten were coaxed out of hiding by something I’d written. The characters came back to me, robust and full in their personalities (or weak and 2-D, but this time not for any failure of memory).

I wrote here in January that reviews on the Masthead might be something other than reviews, and that’s still the case. It always will be the case. I write for a chance to hold onto these books over the years and to give each of them a better review than their being a good book. Even the worst books deserve better than that.

I’ve doubted a few things I’ve written, mostly those instances when what I had written went against the grain of popular opinion (or the Pulitzer folks).

I’ve doubted what I’ve read, too. I neither request nor receive books for review, and everything I review is determined by my reading mood. I’ve questioned whether I needed to read certain books that floated down the blogging chain on bloated torrents of hype. I’m happy I never did.

One book leads to the next. I do think about what the next three or four might be – but likely I’ll read only one or two of these within a month of my planning to read them. So with this caveat, here’s what September and October might look like once I finish my two current reads (Stephen King’s It and Victor LaValle’s The Changeling): 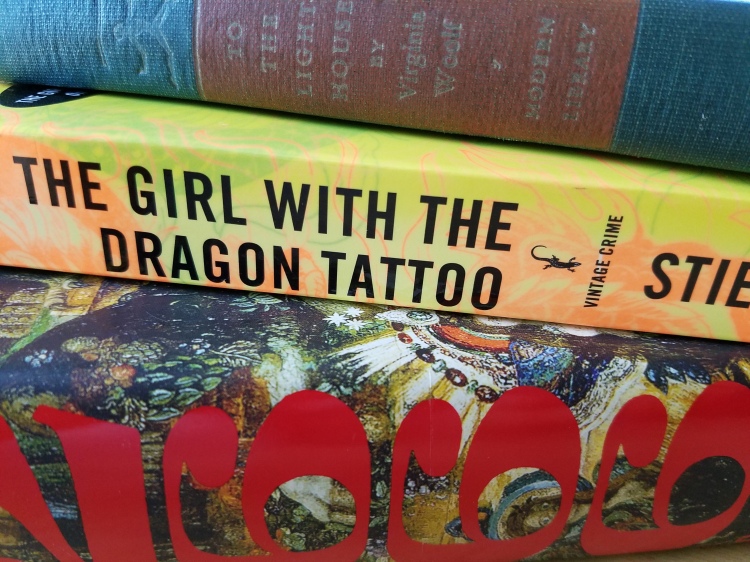 ♠ Virgina Woolf, To the Lighthouse

This is my grandma’s copy (1937 Modern Library), which I brought back with me after seeing her last week. I’ve never read Woolf before, and I now have copies of this one and of Mrs. Dalloway. I admire the work of authors who are able to do something interesting with their prose as well as their stories. I want a psychological novel that doesn’t hurt in the Russian way.

The pretty kind of ugly: 2666 looks just a little eerie, set against the mystery of disappearing women in the border town of St. Teresa. Its jacket blurb promises stories inside of stories, philosophy, German literature and aching souls and a great span of time to let it take root and grow like weeds.

♠ Stieg Larsson, The Girl with the Dragon Tattoo