It’s a verbal labyrinth; it’s a zoetrope of rape and murder and prison violence; it’s a deep sea fish that crawls, impossibly, through the Sonora desert; it’s a world in which the Virgin winks and the whores are cross-eyed. 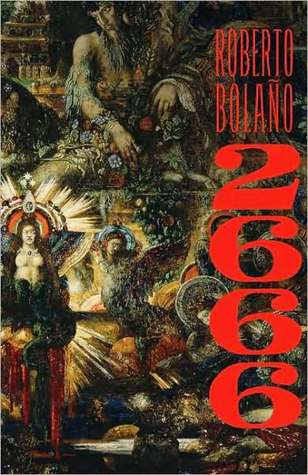 There is no summary for this book. 2666 is Roberto Bolaño’s final opus, published posthumously one year after his death in 2003. Its five parts are incongruous but have a tip-of-the-tongue commonality that sucks them toward one point: Santa Teresa, Sonora, Mexico. Ignacio Echevarría, Bolaño’s literary executor, writes in an addendum to the FSG edition that the novel’s title references a passage from one of Bolaño’s previous novels, Amulet, which he had published five years before 2666:

Guerrero, at that time of night, is more like a cemetery than an avenue, not a cemetery in 1974 or in 1968, or in 1975, but a cemetery in the year 2666, a forgotten cemetery under the eyelid of a corpse or an unborn child, bathed in the dispassionate fluids of an eye that tried so hard to forget one particular thing that it ended up forgetting everything else.

And 2666 really is a cemetery of sorts and one that inters all the creepiness of something crawling beneath the eyelid of its many corpses.

The Part About the Crimes, longest of its five parts, is also the heaviest. Roughly half of its pages detail, in bare language of crime reports, the rape, strangulation and death of nearly 300 women. It isn’t sensationalized. It isn’t sexualized. It isn’t misogyny in print. It just is.

The violence becomes staggering because it doesn’t seem like so much at first. Bolaño wrote the descriptions into the storyline as a smattering, and at first it seems like a few examples to highlight a point, that extra detail that makes the violence more real. We think these reports will drop off before long, and we’re galled that they never do. Right up until the end we read that dry, matter of fact prose of crime reports, fluffed out only rarely with the  highly personalized flourish of the individual detective who wrote it up. It feels like too much, like a suffocation.

The next dead woman was Leticia Contreres Zamudio…in one of the private rooms of La Riviera, they found the body, which exhibited multiple wounds to the abdomen and chest, as well as to the forearms…

We want it to stop, as if these crimes were something we could stop by shouting for them to Go Away!

And still they keep on coming:

She was dressed in Lee jeans, a sweatshirt, and a red vest. She was very thin. She had been raped numerous times and stabbed, and the cause of death was a fracture of the hyoid bone.

Three hundred deaths. And they sit there within Bolaño’s  larger story that contains, among other things, a detective’s love affair, a university rector’s insomniac philosophy and an enigmatic German writer whom we think we’ve found in these pages while always doubting it’s really him.

Bolaño’s prose is varied in technique: stream of consciousness, Spartan, intellectual, fumy, slang, formal, gesturing – and yet consistent. Bolaño had the rare ability to create something so complex that, in its very complexity, feeds off itself, is self-referential and evokes in the unlikeliest of places the feel, tone, motifs and characters of its previous incarnations, i.e. its forerunning parts.

The first part, the Part About the Critics, is child to the Baudelaire that Bolaño chose to open his novel: an oasis of horror in a sea of boredom. Its subject matter is mundane and the perfect background for Bolaño’s prose; it’s a much-needed aperitif before we tumble down the rabbit hole.

Because 2666, swallowing up centuries of art, history, literature, biology, mysticism and politics, in its writing unfolds experimentally as a pastiche of numerous artistic styles.

We can read the parts to 2666 as individual novels with complete stories that niggle the mind into exercising perhaps those areas of itself that it has long forgotten; that’s how different each of the parts to it is. Bolaño had initially intended 2666 to be published as five separate books. A series, one through five, that can also be puzzled into a rebus that offers us a new perspective to read it from part five to part two and maybe then moving to part four, three and then finally part one at the very end – or in any combination we choose.

But it all does connect. More than this, any one paragraph in this novel, chosen at random, guarantees some kind of reaction, whether mental or more visceral. Bolaño’s writing always has something to say, and our own imaginations determine what images we read and what emotions we feel.

2666 is provocative in its language, its attitude, its blasphemies and vulgarity. If any book can lay claim to vulgarity with tact, it’s this one. Bolaño has a distinctive style (as readers of his more popular Savage Detectives already know), and 2666 is a distinctive book. It’s a tricky text, but it’s worth the strain.

…and despite the chaos of the text, in the end he was left with a feeling of great satisfaction.