In all the world, I know only one woman. No woman but my wife moves me as a woman. And my wife regards me as the only man for her. From this point of view, we should be the happiest of couples. 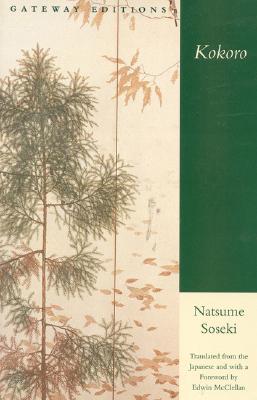 It was Tolstoy who told us that every unhappy family is unhappy in its own way, but it’s an axiom that also runs through Natsume Soseki’s Kokoro.

Kokoro is nuanced in its treatment of relationships and the changing values of the older and younger generations as the Meiji period, on its leave, ushered in the new Japan. In light prose, Soseki gives an account of what enduring friendship requires and what fulfillment in marriage looks like under the worst of circumstances.

Soseki’s narrator is a young student who comes from a provincial family, and he feels his position acutely: worried about his future prospects, anxious over the pride his family has of him, frustrated at his own naivety and, in equal measure, at Sensei’s bitterness.

The boy meets Sensei while swimming at Kamakura during his summer holiday. Sensei interests him from the start as a man who, though unsociable and aloof, has a sure attitude and relaxed nature; is, in short, a man of experience who may have some wisdom to impart.

And unlike his own father, Sensei is a Tokyo man. While his father may be content to while away the hours with little thought, Sensei is a man who can’t stop his thinking, reading and studying, although his industry has no direction.

With Soseki’s student we become privy to the most intimate parts of Sensei, or rather, we catch the after smoke of his thoughts, queer and cynical bits and pieces that, having nothing as yet to substantiate them, serve to intrigue us more and more as they do the young student.

Sensei’s visitations to a certain grave once every month (and his unwillingness to tell the boy whose it is or to allow his wife to accompany him) provoke the first probing questions from the boy, but Sensei’s answers leave him with little: he discredits those who purport to do right by him; he teaches the young student that money is guaranteed to make rogues of men, even those whom we trust, and that always – always – there is guilt in loving.

He mentors the boy with these strange bits of advice he’s extracted from his own experiences and fails to grasp that his friend, though young, may not be the same as he once was.

Kokoro was first published in 1914, two years after Emperor Meiji’s death and at a tipping point in Japan’s history as Western values crept in and a modernization upturned the old ways of life.

It was because he despised himself that he refused to accept openheartedly the intimacy of others.

The third part to Kokoro is written in the form of a letter Sensei writes to the boy, and he begins by writing how his relatives maneuvered him out of his inheritance and held over him his refusal to marry his cousin. Such background is mere introduction though, accounting only for his roguish view of men awaiting money.

It’s Sensei’s writing of an old university friend, K., that explains such distrust of himself.

Sensei and K., loyal to each other in their friendship, came to love the same woman, Ojosan, daughter of the woman who rented them rooms in her house when they themselves were students. K.’s own character – his stubbornness and resoluteness – led him eventually to quietly resign his love and then to take his own life when Sensei, knowledgeable of K.’s love for Ojosan, proposed to Ojosan himself.

Kokoro is an idealistic novel that, in K.’s suicide and his adherence to an outmoded junshi (fidelity in suicide or loyalty expressed in death) underlines the innate fallacy of that same idealism.

‘You must then be the only person Sensei likes to be with,’ I said.
‘Certainly not. I am like all the rest in his eyes.’

Sensei loves Ojosan for the both of them, but it’s a tainted love. He writes that he feels he’s a mean sort, just like the uncle who deceived him in his inheritance. And Ojosan feels this taint, understands it without participating in it, and loves her Sensei all the same.

K. could not bring himself to live while he still loved the woman who was to be his friend’s wife. He committed junshi 35 years ago, and now that Sensei has poured his life into the young student, a boy of the new Japan, he writes that he will do the same.

But what made the unsociable, distrusting Sensei shelve his life with the young student?

This need to plant one’s life in another man as if for safekeeping in death, is like that felt by Ippolit in Dostoevsky’s The Idiot. Indeed, “kokoro” is generally translated as “the heart of things,” and that fear of Ippolit’s, that he would die without any other man understanding the fullness of his self – the heart of things if you will – is a large part of Dostoevsky’s novel as it is Soseki’s.

Sensei’s confessions to the boy serve as his immortality even as he quietly accepts that his time has come, as it had for the old Japan.