Nasty, brutish and short…Stephen King’s The Stand is 20th century Leviathan in its treatment of mankind after an engineered super flu kills most of the world’s population. 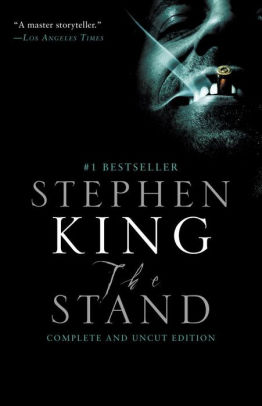 Society is forming anew and, as Glen Batemen muses with the cynic’s air, all of man’s old toys lie discarded and just waiting to be picked up – the cars, yes, but the guns, too.

And there also lies the playground of the Nevada desert, and its toys – baking in the heat, winking in the sun – are stamped with three downward triangles and positively radiate ill will. We’re given the chance to start anew and where we take that chance determines our direction: East…or West.

As the outbreak surges and Captain Trips cuts down swathes of people, an avoidant disbelief takes hold. It’s a disbelief too lethargic and unrealizing to act with any real counter against the fearsome anarchy that creeps in and explodes as its own infection. But even anarchy must peter out; Captain Trips has an indiscriminant taste and what’s left is a dread silence, the silence of a world that has lost 99 percent of its people and has left behind only a preliminary desperation: man on his own in a new ghost town.

In the West it’s the Walkin’ Dude, aka Randall Flagg, aka the Dark Man, aka (his name is Legion), and he issues forth his own brand of satanic verses, his lapdogs’ loyalty never flagging for fear of flogging. In the East it’s Mother Abagail, the oldest woman in Nebraska, a black woman at the helm of a new Crusade in righteousness, though its more defensive and precautionary than it is crusading.

The Stand moves inexorably toward an end we know is coming, each man having staked his claim for Good or for Evil, for regeneration and tabula rasa or for Machiavellian power. The Stand is, after all, the novel in its most basic form: Good versus Evil, the two entities written as such and only barely disguised by the characters of Randall Flagg and Mother Abagail, a pair of nominal stand-ins for something much larger.

But even as this polarity drives his novel forward, King leaves room for free will that just can’t sit still. The transformation of Stu Redman from down-and-out Texan to one of his central heroes; and the intellectual strain he put upon Harold Lauder, a boy who knows what he wants and in his pride and many grudges (recounted in a book with the apt label, “Ledger,”) goes astray – these are sub-stories that intensify King’s novel, and that realism of his characters in spite of it all, that faint tinge of idealistic cynicism mired in the effluvium, is what has always been one of King’s strong points.

The Stand is an epic novel, its breadth comprising characters as varied as a pyromaniac called Trash Can Man, whose own insanity bites the devil in the ass, and Glen Bateman, a cynical sociologist whose unnerving perceptiveness places him equal to Agamemnon’s Nestor.

Yet for all its 1,200 pages and its grand aspirations, there isn’t a whole lot that actually happens in the novel. Part of King’s genius lies in his ability to distract with personality: the story of Harold Lauder or of Lloyd Henreid, for instance, is every bit as well-written as the story of post-plague America, and we read King’s novel for the journey more than anything.

Because The Stand succumbs to the weakness apparent in many of King’s novels. Though the man can write and throw his readers every which way over the course of his books, he rarely can write an ending that does his stories justice.

While Misery he never reconciled and while his ending for The Shining served as cheap shot prologue capping off an otherwise fantastic feat of writing, the ending to this one is just dull and seemingly written by a rote formation of sentences that dutifully queue up single file. And then he gets schmaltzy: the saccharine curdles into a Sweet Treat indeed.

This is the uncut version, mind, and the epilogue is the ending it should be.

Because the earth lies fallow now, though the nascent Boulder Free Zone is reaching a population of 11 thousand people. Fresh start, don’t make the same mistakes.

But man, oh, man…man is what he is, and the Big wheel keep on turnin’. Nice ta meetcha, Mr. Flagg, thought ya died! Now – round and round we go…Proud Mary keep on burnin’.

2 thoughts on “Stephen King, the Stand”