This Side of Paradise forces the tremendous personality Amory Blaine into extreme dissipation and, finally, a man. 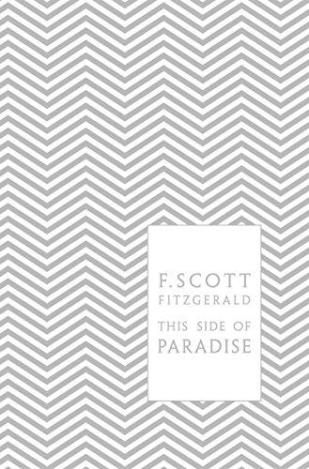 This one’s got swagger to it, and it’s got the necessary snark for dividing Princeton’s student body into try-hard intellectuals (Slickers aka hipsters) and moneyed followers (Big Men on Campus aka basic bitches).

F. Scott Fitzgerald made his Romantic Egotist into a man, employing every means at his disposal, a varied menu that offered him in turns a Bohemian mother, a priestly mentor, the ivied halls of Princeton and college gaiety, war and smoking absinthe and a Narcissist of a protagonist whose exclamations over the sea are both truly felt and truly recognized for the banalities they are.

Paradise is also Fitzgerald’s first full-length novel, one he wrote when he was 24, and between the discarded loves and the intellectual ennui born of an over-active ego, he must have felt Amory’s position acutely. Paradise is Fitzgerald’s maturation as much as it is Amory’s.

He loathed knowing that tomorrow and the thousand days after he would swell pompously at a compliment and sulk at an ill word like a third-rate musician or a first-class actor.

It’s the monotonous irony of the hipster whose actions, working at cross-purposes to his motives, only ground him more securely into a “type.”

It’s the desire to win out at the popular things but at the same time to scorn these same things for their unoriginality and general unimportance. It’s the college hustle. It’s the fight for leadership in student clubs, for recognition at the college literary magazine, for status and power that find their common end at the Princeton property line.

Amory is merely a personality whose life is defined by…well, Amory. It’s with lip-curling satisfaction that we find him reading Dorian Gray.

Dividing his novel into pre- and post-war, Fitzgerald gave the Great War itself only briefest mention in Paradise. However much it shaped the earlier part of the 20th century, Fitzgerald relegated it to an epistolary intermission between the two books that make up his novel.

“The Romantic Egotist,” the story of Amory as he enters Princeton and makes eyes at the girls and pulls the college pranks, is replete with snide commentary, collegiate competitions, and poetry that belies the dilettant behind Amory’s supposed authenticity. But the story of Amory post-war, “The Education of a Personage,” is a shuttering down even in its written style.

The profusion of words that prose allows a novelist – and the chance for the writer to have his hands in everything – stops abruptly in Paradise with the onset of war. The second half of Paradise opens with Amory’s affair with Rosalind, and Fitzgerald chose to write it in dramatic script, a style that offers efficiency, is choppy, terse and more restrained to the matters at hand than is prose. After the effulgence of the first book it’s the written equivalent of blank eyes.

While his later Gatsby produced a swell of faded desire and emotional usury, This Side of Paradise gives off a playful, naive confidence that shortly gets hollowed out and leaves post-war, post-college Amory Blaine sitting on a curb, thinking over his future and nodding to himself in sober realization: this is some real shit now.

…the sentimental person thinks things will last – the romantic person has a desperate confidence that they won’t.

The more things change…Amory came back to a world that, for all the upheaval and all the liberations, is much the same. He’s sorry about the fact that there is nothing new anymore and that all which seems so is only the twisting of age-old truths into pert little ben mots (if he were his old self, he’d do well with Twitter). Leave Princeton to the slickers, then: the Big Men might have something after all – they at least have principles and constancy.

Paradise is both more deeply jaded and more enthusiastic than Gatsby, an assertion that has its proof in Amory’s final exclamation: I know myself…but that is all. The despondency of those last three words tempers the determination of the first.

It’s in his perceived agency that Amory finds the makings of the man within. Man can choose to feel small as he looks upward to the spires of skyscrapers – or he can choose to feel powerful, for it was man who created them. He’s starting to become what his old mentor, Monsignor Darcy, called a personage – a man without need of convention, a man wholly unto himself and who grew into such a thing through the requisite measure of disappointment that’s apt to buff pure arrogance into a more modest surety.

He’s starting to see that maturity is not the absence of personality, but instead the acknowledgment of it and the mastery in availing it to your advantage.