School-age grudges and backroom bargains line up the chips against ladies’ secrets and counterfeit fathers in The Adolescent, Fyodor Dostoevsky’s penultimate novel and one that built on his previous work with surprising maturity. 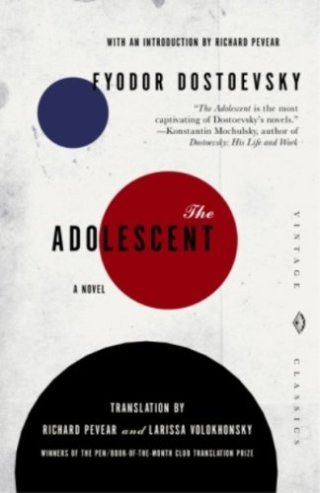 Vladimir Nabokov, in his Lectures on Russian Literature, said of Dostoevsky that the man “seems to have been chosen by the destiny of Russian letters to become Russia’s greatest playwright, but he took the wrong turning and wrote novels.” Though he was talking about The Brothers Karamazov, which Nabokov called a “straggling play,” the comment holds for The Adolescent, a gossipy soap opera done in high style.

Like much of Dostoevsky’s work, The Adolescent has a chasteness and purity to it, that glint of virtue that flickers between the filth.

With The Adolescent, Dostoevsky took the golden boy innocence of The Idiot and rammed it against the twisted crimes carried out in The Brothers Karamazov. And like his previous work, The Adolescent isn’t just a mephitic tale of violence and spite, though, to be sure, the revolvers and shady old curs are here, too.

…don’t say anything to him if he starts talking, and if he starts asking questions, answer with nonsense, keep mum…

Though he titled his novel The Adolescent (in other translations, The Raw Youth), it’s a novel of surprising maturity. Put simply, The Adolescent is, on surface, an asinine soap opera of people who can’t communicate. But this guise is, like its title, mere costuming for a novel that at heart is a celebration of fathers and sons.

The Adolescent is the first-person account of Arkady Dolgoruky, the illegitimate son to a former serf and her master, Andrei Petrovich Versilov. It’s the story of a son who seeks his natural father and picks up along the way a love for his father that vies with his revulsion.

Arkady finds that Versilov is a man of awful turnings but one with a higher character than he previously supposed. He’s also a man more current in his life than he presumed and whose actions upset his plans for a truly independent life.

Now, it wouldn’t be true Dostoevsky without a love that is one hair’s breadth away from hatred, and Dostoevsky gave his hero no reprieve when he populated his novel with so many princes and hidden babies and not-indifferent past lovers that the tone of his novel is one of good-natured churlishness purposed, it seems, solely to upset his hero.

The Adolescent celebrates the father-son relationship without stooping to sentimentality, and maybe it took that churlishness to make the poignant palatable. With love as currency, Arkady and Versilov’s relationship is an inverse of that of the prodigal son.

The Adolescent certainly doesn’t shy away from a tangle of delicate relations, and in this tangle, name is everything. It’s grounds for inheriting, a basis for marriage and reason to brandish a gun. The matter of “who’s who?” becomes extremely important.

At center of the novel – and at center of Arkady’s “idea,” his pursuance of pure independence and becoming a man’s own man – is a letter written by Mme. Akhmakov, a general’s widow and daughter to Prince Sokolsky, an acquaintance of Versilov’s and friend to Arkady. In this letter, written many years prior to the events of the novel, Mme. Akhmakov asked another prince, with whom she’d had an almost affair, about the possibility of declaring her father mentally unstable and becoming herself trustee of his accounts.

Arkady finds himself in possession of this letter and, with love and money and status on the line, he may use it however he wills and hurt a good many people in getting finally what always was denied him.

Wrapping this up nicely is that father and son both pine for the same woman. Akhmakov herself loves neither (or maybe is too pragmatic for either man). The bow on the box is that her father, the old prince, who in truth still mostly has hold of his wits, is set to marry Versilov’s legal daughter, Anna Andreevna, a marriage that would bar either father or son from marrying Mme. Akhmakov.

The Adolescent is such a mess of intrigue in love, family, sex and business; and waiting in the wings are the petty criminals, detached from the main thing and dotting the pages, vulture-like, their talons on the pulse of the matter, biding their time and waiting to cash in on it all.

Of course, Dostoevsky knew a hard humor, and half the purpose of those vultures was to incite a little mirth. Dostoevsky’s humor is that of an author’s self-satisfying tonic.

He gave Arkady’s legal father a name that in Russia would have resonated and one that left Arkady in the awkward position of always clarifying: not Prince Dolgoruky; simply Dolgoruky.

‘Are you a prince?’
‘No, simply Dolgoruky, the illegitimate son of my former master, Mr. Versilov.’

Born with a complex and seeking both revenge and love from the man who neglected to call him son, Arkady is the youth who bears witness to a fault of all youth: an ignorance to the fact that there’s still much to learn and much pride to stifle.

Because apart from his search for the love of father to son and son to father, The Adolescent is also the account of Arkady’s pursuit of self-sung power, what he terms “becoming Rothschild” – the having, but not exercising, of power over others; the feeling of a hidden sense of superiority through a higher moral character than that displayed by those who’ve abused him all his life for that “simply Dolgoruky.”

Insult to injury is that Arkady is blind to the gigantic irony – Versilov is living out his Rothschildian “idea” to the letter.

Because at root of his “idea” is detachment – detachment from money, from love, from family, from this mortal life’s pleasures. At root of it is to be unaffected, to live so independently that outside events or circumstances cannot affect you. It’s self-satisfaction and contentment. It’s being rich without the need to flaunt it. It’s having self-surety.

It’s what we’ve come to call maturity, only taken to its very extreme.

Written with the unseemliness of a first-person narrator who suffers from injured pride, Dostoevsky used this voice to fire up his adolescent into a frustrating little thing and then smelter him down to earth again. Arkady’s dogged determination in living out his “idea” couples with his inborn need to understand his father, and it becomes such a snarl that there’s no chance in salvaging the thing. In other words, maturity in the extreme is still raw youth.

Dostoevsky wrote his novel at the same time that Leo Tolstoy was working over Anna Karenina. Truly, every unhappy family is unhappy in its own way. The portrait of the Dolgoruky-Versilov clan that his Arkady writes is a story of damaged childhood but also, between the wisdom he receives from his legal father and the half-finished philosophy poured out by his natural father, it’s an intimate talk that we can’t help but imagine ought to be preceded by a mere four words: “Now, Son, listen here…”