For an author known to upend the conventional to suit her purpose, Margaret Atwood missed the mark with Alias Grace. History called the shots in this one, and perhaps such a restraint proved too large a hurdle. 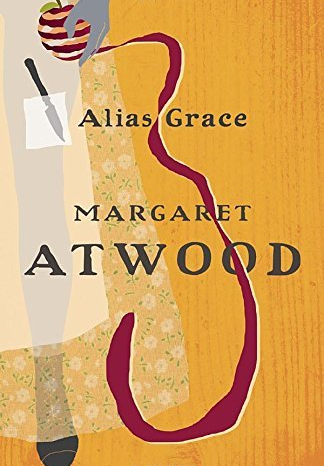 The 1843 murder of the gentleman Thomas Kinnear and his housekeeper mistress Nancy Montgomery is lifted from the historical record, along with the characters of Grace Marks, the titular murderess, and James McDermott, her alleged co-conspirator.

Ripe and festering with a young girl’s maligned reputation, shifting identities, lunacy and crime, the Kinnear-Montgomery double murder should have been putty in the hands of Atwood, normally a convincing author as well as temptress to the imagination and one who has tricks for curling the corners of her sentences into sly little images…but putty it proved not to be.

Atwood tells the story of the murders with few embellishments; only, absent here are the narrative talents of a Truman Capote for novelizing real-life sensationalism, or the guile of a Wilkie Collins, whose Woman in White proved he was master manipulator of the Victorian gothic mystery.

To be sure, there is a mystery, and the voice Atwood gave to her Grace Marks tips between dim-witted simpleton and clever schemer. It’s both trademark Atwood, who has always liked to keep us guessing, and perfect hook for a crime whose prosecution raised many doubts about its convictions and prompted the question of how much weight is given to a woman’s testimony.

There is also a plausibility in its setting. Atwood has a grasp of the authentic Victorians that most authors of the “modern” Victorian novel lack, and her written portrayal of mid-1800s Canada is born of sentiment and period phenomena rather than owing to a distracting attachment to petticoats and other solely material details.

Still, mystery and plausibility are not enough to save Alias Grace as a novel. Couple this with a muddle of turgid descriptions that place every detail at eye level and leave its scenes harnessed to a flat composition of inaction while its characters, once posed, don’t move but instead sit out the lengths of their stays, duty-bound to their prescribed functions, before falling off its pages, and what we are left with is a feeling probably akin to that of peering into a Victorian doll house for a good many hours.

I like to think what Capote, that man who gave us Cold Blood, could have done with Miss Marks et al.

Alias Grace disappoints because it’s far below what we know Atwood is capable of writing. In works disparate as Oryx and Crake and The Handmaid’s Tale, she has shown us that she can manipulate mundanity to an effect that is anything but.

Authoring a style of controlled tenacity, Atwood’s sentences may often be bald, but her words skew perception. In her other work, she has shown a curious talent for abasing her characters while appearing merely to note down the most basic observations and the most minimal details, and what we reap is that characteristic squeamishness in turning the pages of her novels, a squeamishness that makes us ill at ease in a way we can’t quite define – as if we were meeting a friend but that friend presented himself as his mirrored image. For all its waxen sheen, Atwood’s words disguise what is in fact the hag’s wormy apple – and we are Snow White.

That subversive trickery is what’s missing in Alias Grace. Grace is Atwood sedated, and Grace Marks’ supposed amnesia is inadequate reason for it.

Alias Grace drags on page by plodding page as a one-dimensional manuscript. There’s little that happens through the first 450 pages of this 560-page novel, and the story Grace tells is hardly impassioned.

But prologue to the main of Grace is a ditty of a poem whose stanzas outline the crime and give us our preferred Atwood, cut as it is into verses jeering and malicious. Her prologue is the feel of her novel and it’s the story of her novel and it’s the truth of the era but with the modernist’s flavor of feminist perspective and blurred morality touched up with a bit of erotic humor. Moreover, it’s Margaret Atwood – and the only part to Grace worth your time. This reviewer recommends you enjoy those first six pages; skip the other 561 in favor of any of her other novels.

Or, perhaps, a Wilkie Collins.