And where did all these sages get the idea that man needs some normal, some virtuous wanting? What made them necessarily imagine that what man needs is necessarily a reasonably profitable wanting? Man needs only independent wanting, whatever this independence may cost and wherever it may lead. 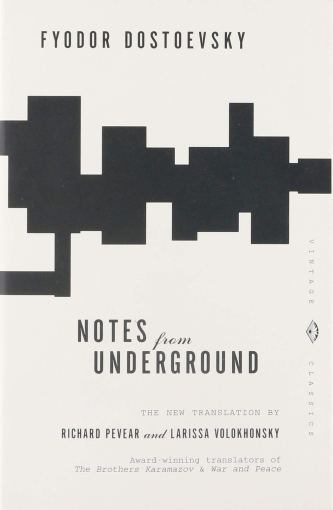 With Notes from Underground, first published in 1864, Fyodor Dostoevsky picked up an axe of condemnation and swung—hard. Hard against an imposed ideal, hard against a code of right and wrong in human feeling, hard against the presumption that reason could dictate desire.

Dostoevsky tells us that not only is man inherently flawed but he is flawed because he wills himself to be so.

If ever a character was written to be the “fallen off the wagon” type it may be the retired civil servant – the underground man – who bombards us with an inartistic, disorganized diatribe that at first we take for the philippic of a used-up man jaded by others’ snubbing—until we agree with him.

Man would purposely go mad in order to be rid of reason and have his own way!

He derives purpose from humiliation and has appetite enough for self-inflicted shame, pursuing with unabated haste the ball that won’t stop rolling: like words already audible in that moment when the mind wishes to take them back, he trips over his tongue to his own detriment and finds himself tangled up with old school bullies made proud by his own projections and a whore made only more virtuous with his every attempt to denigrate.

What we find in his mess of words isn’t an obtuseness or a contrariness or a grumpiness for the sake of grumpiness (though we may feel these at first), but instead a point-blank confession without apology: I am a sick man…I am a wicked man.

The pages of so much of Dostoevsky’s work are littered with these paradoxalists. More than any other author, he was able to show in his writing the plurality of the individual; he could “counter empathy with intellection,” as translator Richard Pevear puts it in his introduction to the Vintage Classics edition of Notes.

Divided into two parts, Notes from Underground is both polemic and parody.

The harangue of the first part unfolds as a circuitous defense. It’s the nihilistic child spawned of the jaded romantic of the novel’s second part, in which the underground man recounts the string of events – the school bullies, the madonna-like whore – that brought him ‘round to the view of the first part.

Where part one is the plea for us to accept the plenitude of human failure as contributory to human happiness, part two is a comedic series of retreats into bad habits, accompanied by the constant cry of “well, fuck you!”

That’s not to say that either Dostoevsky or his underground man believed that man should lay down and rot. Dostoevsky, enamored of man’s creative power, recognized, too, man’s tendency to relish achieving but not his having achieved, and he wrote his underground man as one who is always moving – impulsive, acting on every urge without thought – but always with that justification that this amounts to a better life than one of toeing the line in a world that has no patience for those who don’t fit the mold.

Put differently, it’s Pierre Bezukhov in Anna Pavlovna’s parlor, hands too big and fumbling for his hat; it’s Ivan Ilyich fighting against the black sack in those final days—the tone of Notes is undoubtedly Dostoevsky, but its theme is unequivocally Tolstoy.

Notes from Underground is about the internal movement and uncontrolled, unexplained wanting (the “omitted” profit in the tabulation of profits that man might rationally seek) that defines a man’s life, and through his Notes, Dostoevsky condemns any attempt to make an accounting of emotion.

It’s a burden for us even to be men—men with real, our own bodies and blood; we’re ashamed of it, we consider it a disgrace, and keep trying to be some unprecedented omni-men…Soon we’ll contrive to be born somehow from an idea.

Notes from Underground was Dostoevsky’s pivot toward that multiplicity of the self we see so much of in his later works, and maybe the messiness of Notes had to be written before we could be given a Rodion Raskolnikov or a Dmitry Karamazov.

With Notes from Underground, Dostoevsky tells us that a system in which logic and reason govern every impulse, in which man acts always in a reasonable way – in a “profitable” way – the human will is reduced to mere mathematical formulae and there are no questions left unanswered; there is no room for free thought, for innovation; the “profit” of wanting is unaccounted.

Twice two is four…twice two is five—George Orwell would later use this same equation in 1984 but with its logic inverted: For Dostoevsky’s underground man, the equation is a matter of being slave to a formula, a reduction of man’s conscious self, his will, to an algorithm. For Orwell’s Winston Smith, it’s a matter of truth and a thinking consciousness that dares to right what is wrong.

For the underground man, “Two times two makes four…is no longer life, but the beginning of death.” For Winston, “Freedom is the freedom to say two plus two make four. If that is granted, all else follows.”

Between the two, “twice two is four” is a fight of rationality versus irrationality that churns into one of tyranny versus liberty except that the sides are always changing colors in a fast sucker punch haze.

It’s a formula that argues at once insanity, rationality, freedom and slavery, and grants authority at once to both the individual and to the outer structures that govern that individual life (Dostoevsky) or that govern a society (Orwell).

The commonality is that both writers rejected the homogeneity of any supposed universal ideal as not just an impossibility but as individual life, extinguished.