Tiffany’s, that place of places where nothing bad can ever happen to you, is a place Holly dreams of but never ventures to step inside. 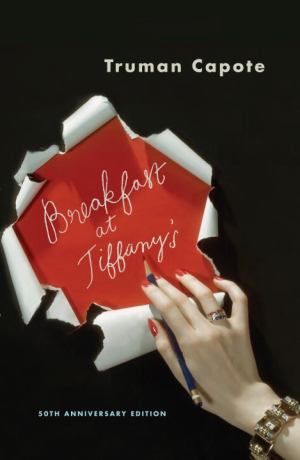 Holly in sickbed: lipstick, eye liner, perfume and pearls but this is no glamour. It was never about glamour but about disappearing.

Holly in hospital is Holly in actuality, and we see what we never noticed before, just as all the men at her dinner parties never saw the bare walls or the emptiness of her apartment and dutifully ignored that quiet little word – traveling – on her mailbox.

Truman Capote’s Breakfast at Tiffany’s is about trying to find a sense of belonging in a world that will accept anything, especially false perceptions, as matters of fact. It’s easier this way; things fit together so nicely this way.

Holly Golightly’s attitude of gritty luxury is her armor, bolstered by her slim black dresses, her equal doses of charm and cheek. She defaults to avoidance when things get uncomfortable and toys with superficiality to cover the fact that she’s a stranger to her own life.

Holly is neither here nor there. She occupies a nebulous middle after rejecting the more traditional courses of American life, but she does so without passion for anything that could fill the resultant void. Always running but only in aimless haste, caught up in the things that come to her instead of seeking out the things she might want, Holly is lost at 19, a woman without compunctions but with the same anxieties as an abandoned child.

Fred, Capote’s narrator, his name given him by Holly after her brother who has gone to war, is the only character who can catch even the tiniest whiff of the Holly Golightly that lies beneath the perfume. He sees her in the spartan apartment she keeps, the foul dishes she cooks and the fragility of her place in the world when he rides with her to the airport.

Holly’s life, that which she lived for her first 14 years before leaving home, is something she only rubs her nose at and won’t discuss. Capote gives us only the smallest hints of the admixture of love and despair from that previous life, and he does so through his prose, revealing more about Holly than Holly herself ever does.

The guitar filled with rain, rain softened the paper sacks, the sacks split and perfume spilled on the pavement, pearls rolled in the gutter…

We get the feeling that all along her skin was too dry for powder to smooth her complexion, that her liner is only a shade darker than the skin beneath those gray-green eyes and that maybe her lipstick is flaking already, though she only just applied it – but the thing is, we didn’t notice until it was time for her to leave again.